Hundreds of people protest against TOTAL across Africa APO Group 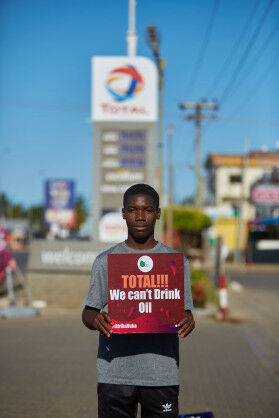 Vanessa Nakate, a Ugandan activist, said: “We cannot drink oil. Because of this, we cannot accept the construction of the East African crude oil pipeline. It will lead to massive displacement of people, the destruction of ecosystems and wildlife habitats. We have no future in oil exploration because it just means destroying the livelihoods of people and the planet. It’s time to select people through pipelines. It is time to stand up for people and the planet. ”

Andre Moliro, Democratic Republic of the Congo activist, said: “Total fossil fuel developments pose a serious risk to protected environments, water sources and wetlands in the Great Lakes and East Africa regions. Communities have concerns about the impact of oil exploration the fishing on Lake Albert and the catastrophic consequences of an oil spill in Lake Victoria that would affect millions of people who depend on the two lakes for a living, water catchment areas for drinking water and food production. ”

Landry Ninteretse of 350.org said: “At a time when the international scientific community is telling us that the world cannot take on new developments in fossil fuels if we are to tackle the climate crisis, Total is still pushing for highly controversial pipelines like the East African crude oil pipeline and the LNG from Mozambique, which threaten to destroy the livelihoods of tens of thousands of people, affect a large part of the various ecosystems and cause millions of tons of carbon emissions every year. ”

Earlier this year, more than 260 African and international organizations sent an open letter to 25 banks asking them not to fund the construction of the EACOP. Total posted statements on its website describing the environmental and social risk assessment and mitigation strategies for the EACOP and Tilenga oil production project as “strict” and claiming “responsible” in relation to the social and environmental issues associated with the projects and act transparently ”.

The #StopEACOP Alliance issued a statement clarifying several misleading figures submitted by Total such as the number of oil wells to be drilled in Murchison Falls National Park and the number of people affected by the project for Tilenga and EACOP.

Total seeks to position itself as a climate leader but ignores the massive climate risks posed by running its fossil fuel projects across Africa.

Nelson Boateng: Get to know the man who built a house out of 13,400 kilos of plastic waste [VIDEO]

Meet a Ghanaian musician who claims to be a hermaphrodite

I have never questioned the authority of Akufo-Addo – Razak Opoku